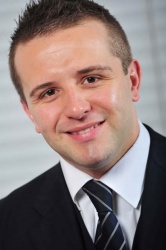 Jonathan was taken on as a member of chambers in September 2013 following the successful completion of his pupillage and he accepts instructions in all chambers’ area of practice. He has undertaken small claims hearings, infant settlement hearings, possession hearings, charging orders, bankruptcy applications and Coroner’s court inquests. Additionally he has prosecuted and defended in the magistrates court.

Jonathan was educated at Cefn Saeson School, Neath, Neath Port Talbot College and the University of Leeds. He undertook the Bar Vocational Course at the BPP Law School, Leeds. His pupil supervisors were Matthew Roberts and Owen Thomas.

A winning combination of high-quality advocacy and excellent clerking and administration.
- Chambers and Partners UK Guide